Give us a Call

Send us a Message

Every time I saw her I had new things to report that I had managed to do as my range of movement gradually increased and the pain and stiffness lessened.

Give her a try it could make all the difference to you, as it has done for me.

Celebrating 10 years of working in Shaftesbury!

The Physio Centre moved up the hill from Gillingham to Shaftesbury in 2008. After a brief period on Park Walk I found a new place called Guinea Court in the old Co-op carpark. Guinea Court was originally part of the old market buildings in Shaftesbury and was then used as a store room for another shop. With a name like that I had to hunt for an old guinea to frame for the wall in the waiting room. I also found lots of pictures to put on the walls as well as a telescopic feather duster to make sure that patients can’t find a cobweb when they are lying on the couch!

The whole site was refurbished and my part was finished just in time. In fact we had the pictures on the wall just 12 hours before the first patient walked in! 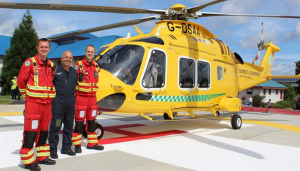 Last year a patient suggested we had a charity tin for the £1 change from treatment and thanks to patients’ generosity we have collected over £100 for Dorset and Somerset Air Ambulance so far.